The Hundertwasser Golden Cupola has arrived in Whangārei

Nearly all successful community projects begin with a vision and are brought to life with the help of supporters and volunteers. It is very fitting then that the 8 metre high, 3.5 tonne, gold leaf cupola was placed atop Whangārei's Hundertwasser Art Centre at the conclusion of volunteer week. 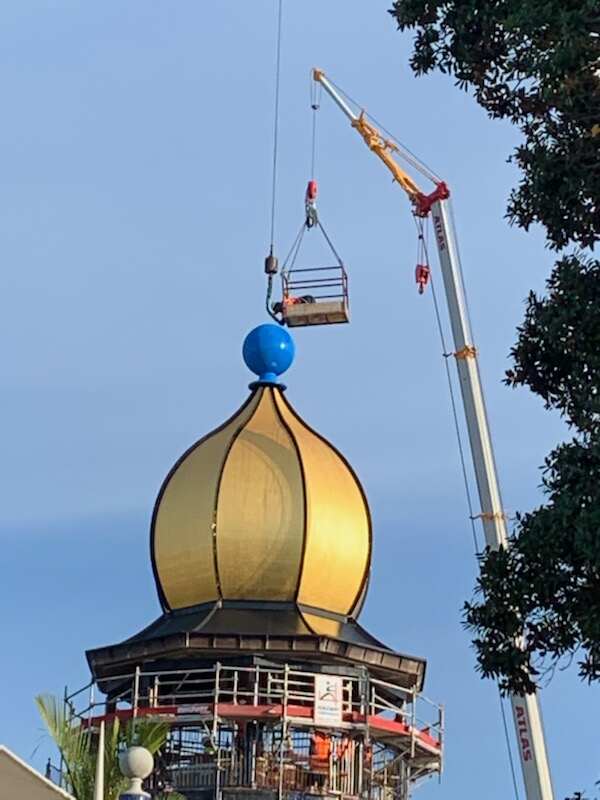 It has been a team effort through successive central governments, local governments and regional councils, along with talented craftsman, local enthusiasts, and driven fundraisers, all under the guidance of Hundertwasser Nonprofit Foundation, that have propelled the project forward.

In 2014, after reviewing the business case of the then $21 million project, I added my support to the long dreamed vision designed by the late international artist, Friedrich Hundertwasser. Former PM John Key, Minister Simon Bridges and Minister for Arts, Culture and Heritage Maggie Barry, supported the proposal and added the initial $7million central government funding. I believe that by adding my voice and the National Party support we helped to carry the baton to get it over the line with just 24hrs to go before the project was cancelled.

I would like to thank Prosper Northland Trust, the tireless volunteers, generous funders and enthusiastic supporters as well as our local trades people for their on going commitment to the project. The Golden Cupola is magnificent and I look forward to the grand opening of Whangārei's Hundertwasser Art Centre and Wairau Māori Art Gallery in December of 2021. Congratulations Whangārei!

We are still reeling from Labour’s Budget and learning where NZ’s taxpayer dollars will be collected and spent: 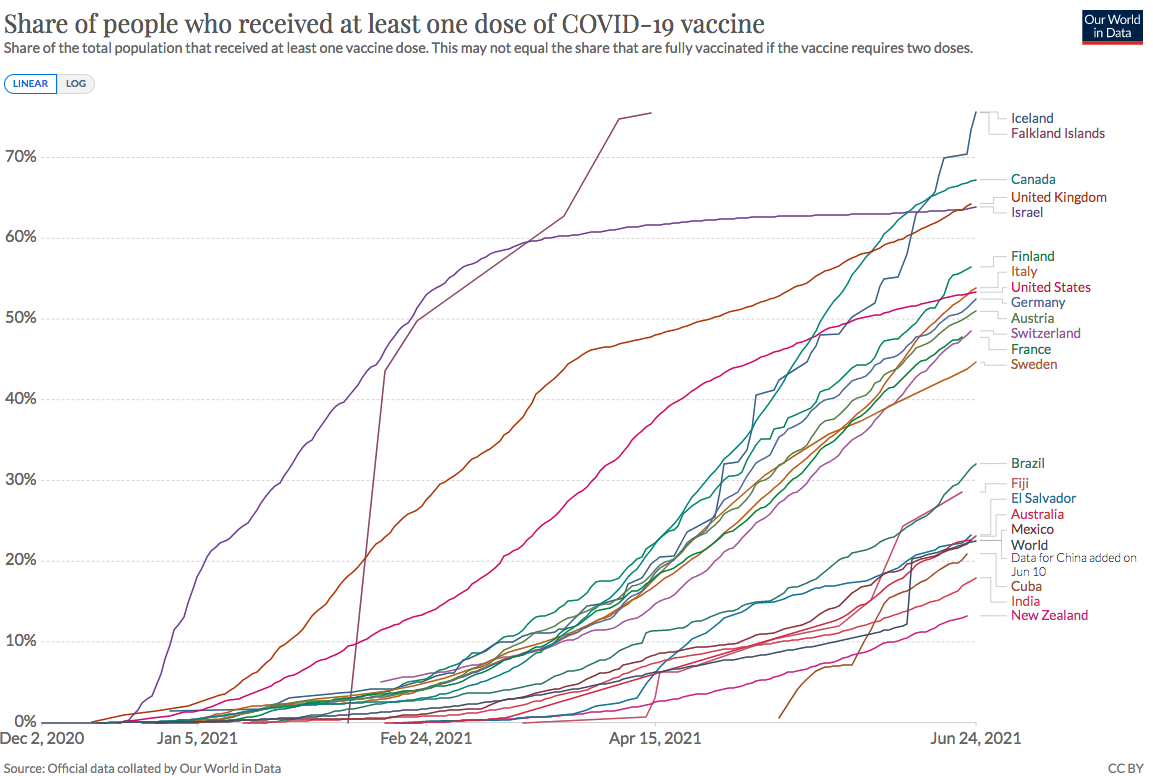 The three Covid 19 Response Requirements to Secure our Future:

Let’s talk about the vaccination rollout:

Me too. One of the key components of securing New Zealand’s future is our vaccination rollout without it New Zealand will remain shut and closed off to the rest of the world. As a medical doc I am expected to be fully vaccinated. Today marks day 21 and it is time for my second dose. Yet, I am weeks away from my second dose as are many others. Why does it Matter? Because Pfizer recommends the second dose as close as possible to 21 days from the first due to the concern that the first dose protection will deteriorate.

As many as 29, 000 New Zealanders turned out on a single day for the 2021 National Agriculture Field Days held at Mystery Creek near Hamilton. Although many in the farming sector are worried about the regulations and challenges ahead most embraced the good mood of the event. Personally, I enjoyed visiting all the exhibitors, but had a bit of extra fun with Mr. Mac of Whangārei and the learn through experience demonstration. 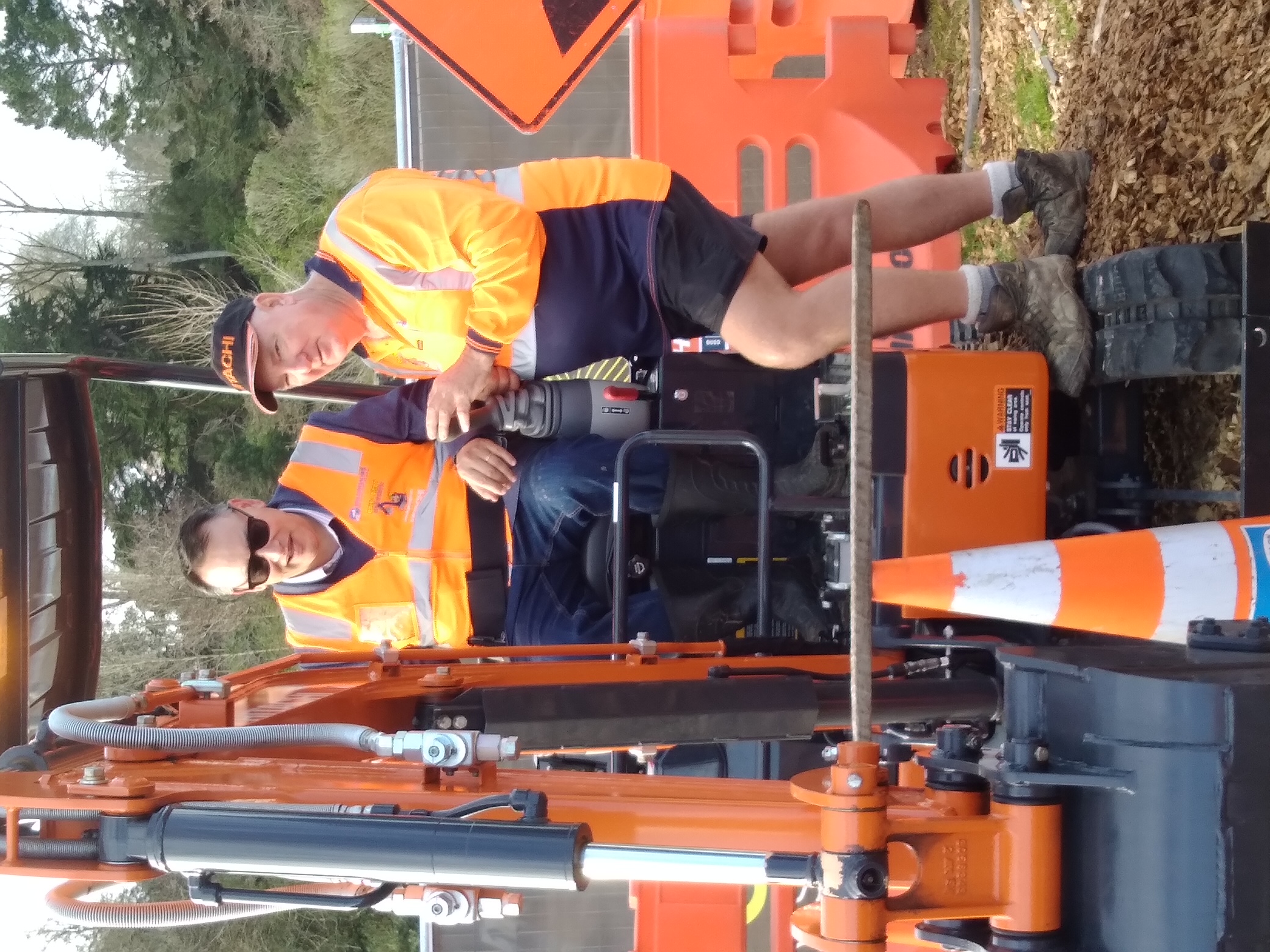 Do you feel safe in Whangārei?

It feels like crime has increased in our community lately, especially so with the more cowardly attacks on our most vulnerable people.  Whether this is more noticeable because social media brought it to our attention, or whether it is because crime has indeed increased in Whangārei, it highlights the need to be vigilant.  I acknowledge the tireless and often thankless work the police are doing in our community.  Let’s not be active bystanders, let’s be careful but let’s work together to help the police rid our community of untoward behavior. Let’s notice our neighbors, let’s acknowledge the kids on their way to school or loitering in town, let’s keep our eyes open and let’s build Whangārei once again into a town we are proud of and feel safe to live. Here are some of the questions that I am asking to hold this government to account for providing police and resources to Northland and suitable law and order policies. NB: There needs to be much more updated information than 3 years ago! 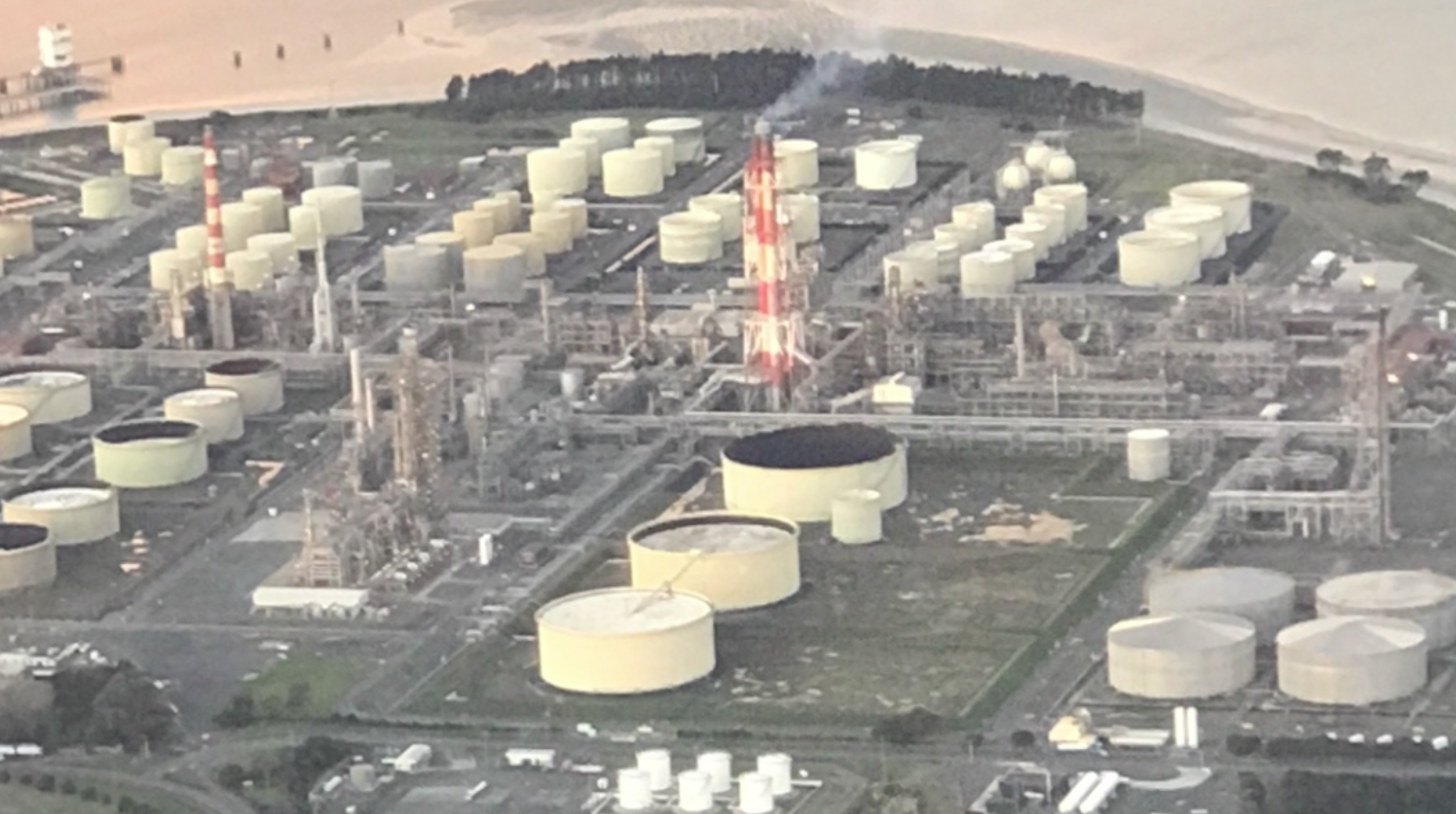 The Loss of NZ’s only Refinery

This week I spoke again with the CEO of NZ Refining and impressed on her the importance of retaining jobs. The impending transition of the Refining NZ from New Zealand’s only oil refinery and the leading supplier of refined petroleum products to the New Zealand market, that includes petrol, diesel, aviation fuel into a import terminal (tank farm) will no doubt have huge implications for the Northland economy. Such as, the possibility of exposing New Zealand to fuel security risks, particularly with pandemics transport and supply issues.  MBIE in March 2020 listed a number of risks to stopping refining, including, having between a quarter and a third less overall fuel stock in the country, no ability to correct imports that are not up to standard and no ability to process crude in a global supply energy.

Let’s be clear on why the refinery is down sizing:

We have no control of offshore environments, but the Labour government does have control over electricity and gas supply and the carbon footprint. The major concern for me and for Whangaārei is the loss of jobs, the loss of wages, the loss of spending in Northland and the impact that will have on our local economy.

Here is me questioning the Minister and holding her to account and advocating for jobs with the CEO of NZ refining.

Reply 23268 (2021) has been answered to Dr Shane Reti
Portfolio: Energy and Resources (Hon Dr Megan Woods)
Question: What investigations, if any has the Ministry for Energy and Resources undertaken to consider the implications of turning the only New Zealand based oil refining Operator in New Zealand, into an import terminal system?
Reply: The Government has engaged with Refining NZ and some other fuel industry participants regarding the implications of Refining NZ’s potential conversion to a fuel import terminal. Officials have also commissioned reports on these implications, and found that on balance, the Refinery has some strategic importance to New Zealand, however its change to an import only terminal does not provide additional risk to our fuel security. Officials from the Ministry of Business, Innovation and Employment are continuing to assess the implications of any change in the Refinery's business model. 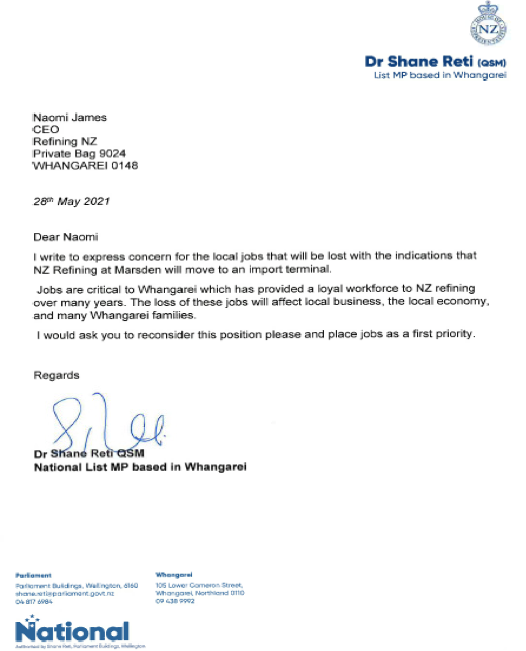 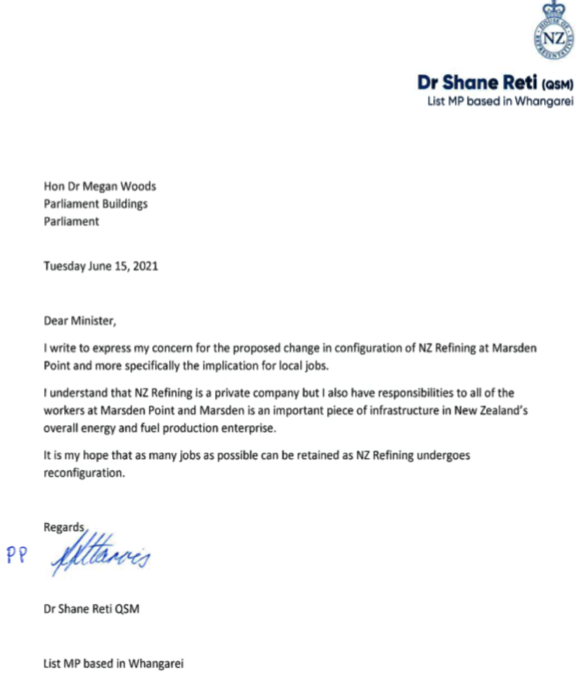 DEPUTY LEADER OF THE OPPOSITION

Your caucus continues to be headed in the right direction.  To run a tight ship means difficult decisions must be made.  Make no mistake, with Judith at the wheel and a solidified caucus by her side we have turned a corner.  Regardless of the media rhetoric, we are holding this government to account while preparing to be the next government. 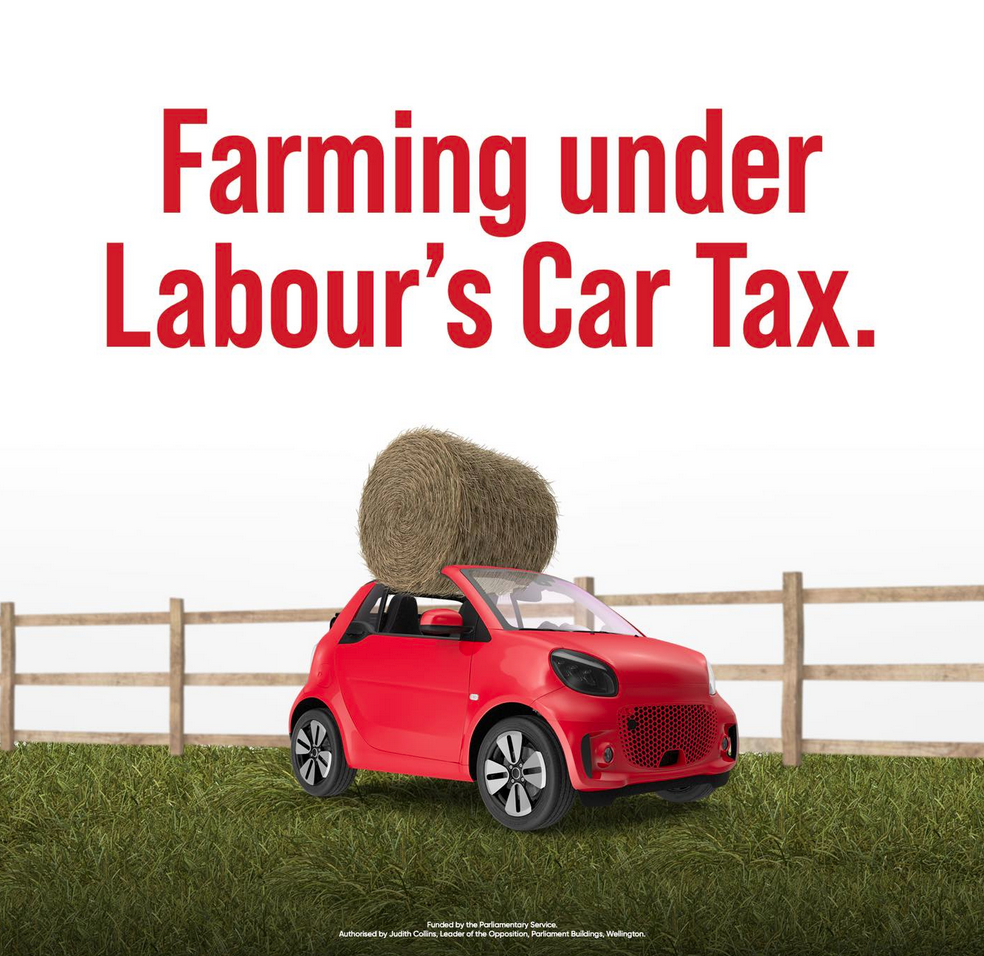 Media Standoff - What can you do today to help our message get media cut through?

Everyday, I am reminded how lucky we are as National Party members to be part of an organization that shares the same core values – from rewarding hard work to promoting fairness and equal opportunity.

Thank you, again to our members – you are the cornerstone of the National Party!